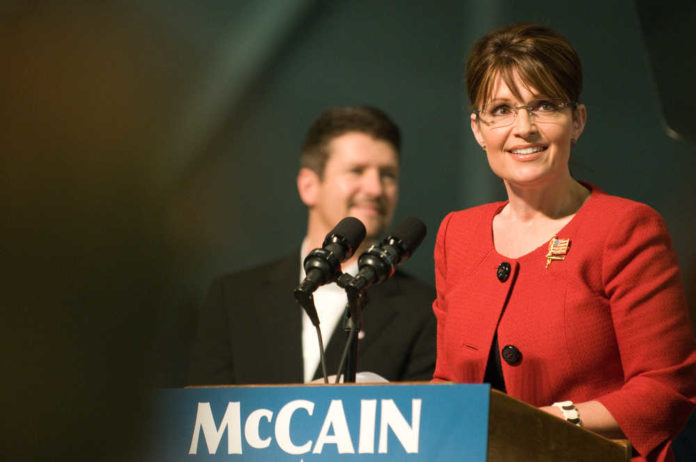 (FreedomBeacon.com)- Last week, former Governor Sarah Palin’s defamation suit against the New York Times had to be postponed after she tested positive for COVID-19. And two days later, despite her COVID test, Palin was spotted dining outdoors at a Manhattan restaurant.

Naturally, Palin’s defying federal quarantine guidelines and venturing out for dinner caused quite a stir in the corporate news media.

But for the staff at Elio’s on the Upper East Side, Palin’s night out was no big deal.

One staffer at the restaurant later told the New York Post, “Sh*t happens.” The staffer said it wasn’t their job to be the “border police.”

The previous weekend, Palin, who is not vaccinated for COVID-19, had dined inside at Elio’s despite New York City’s vaccine mandate for indoor dining. So on Wednesday, the COVID-positive Palin returned to the restaurant to apologize. Staff at Elio’s then sat her party in their heated outdoor area.

Her defamation case is set to resume on Thursday where Palin will be the star witness.

Palin had sued the New York Times in 2017 after the paper published a gun control editorial in response to the shooting on the baseball practice field that nearly took the life of Louisiana Republican Congressman Steve Scalise.

In the editorial, the Times claimed that the mailer circulated by Palin’s PAC in 2010 featuring rifle scope crosshairs over select Democrat congressional districts directly led to the 2011 mass shooting in an Arizona supermarket parking lot that critically wounded former Congresswoman Gabby Giffords and killed six others.

Two days later, the New York Times issued a correction noting that the editorial had “incorrectly stated that a link existed between political rhetoric and the 2011 shooting” and that it had “incorrectly described” the map.

The incorrect wording was added to the editorial by former editorial page editor James Bennet. It is now up to a jury to determine whether Bennet acted with “actual malice.”